It was another action packed weekend in Tullamore for Days 1 and 2 of the National Juvenile Championships. Seven of our juvenile athletes were competing for national titles and new personal bests. Well done to everyone they did themselves and the club proud. On Saturday, in intense sunshine, there were some great performances in very competitive events. Aoife Lenehan threw very well in the U18 shot putt competition just missing out on the medals coming fourth. Katie Lenehan threw very well in the U16 discus also just missing out on the medals and coming fourth. Amy Callaghan jumped very well in the U15 high jump coming fifth overall. In the U15 80m hurdles Niamh Quinn ran very well in her heat achieving a personal best time but unfortunately it was not enough to get her through to the final. In the U14 75m hurdles Loclainn Harris stormed through his heat to come first and progress to the final where he just missed out on the medals coming fourth in a hotly contested final. In the U13 javelin there were some great throws with a huge throw of 44.09m winning the gold medal, in such a competitive field Lee Callaghan and James Bellew both threw well with Lee throwing a personal best. On Sunday in very changed weather conditions of almost continuous rain and drizzle, there were some more great performances and this time the medals did not prove as elusive.  Starting the day off well Niamh Quinn threw brilliantly in the U15 discus to claim the gold medal with a personal best throw of 31.88m. Amy Callaghan and Amy Bellew both threw well in the U15 shot putt with Amy Callaghan throwing brilliantly to claim the bronze medal.  Laura Bolster jumped very well in the U14 long jump to come fourth overall and after a long day ran brilliantly in the 80m sprint heat to progress to the final and claim the bronze medal. Katie Lenehan threw well in both the U16 javelin and shot putt and Aoife Lenehan threw very well in the U18 discus to come fourth again just missing out on the medals. 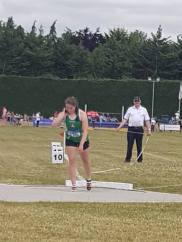