A huge well done to all our athletes who have competed over the last few weekends in Tullamore at the National Championships. They have done themselves and the club proud qualifying to compete at national level and putting in great performances. A big thank you to all the coaches and especially head coach Phelim Joyce for all the time and effort over the year getting the athletes ready for competition.
Day 2 and 3 of the championships took place this Saturday July 13th and Sunday July 14th and we had 10 juvenile athletes competing. A trio of silver medals was won. On Saturday Niamh Quinn put in some great throws to win silver in the U16 discus. A second silver medal was won by Laura Bolster who ran brilliantly in the U15 100m sprint, Laura also jumped very well in the long jump coming fifth overall. And the third silver medal was claimed by Loclainn Harris on Sunday in the U15 250m hurdles.
On Saturday James Bellew and Lee Callaghan both jumped well in the U14 high jump, and on Sunday Lee threw a personal best in the U14 discus just missing out on the medals coming fourth. Amy Callaghan and Amy Bellew both threw very well in the U16 shot put with Amy Callaghan just missing out on the medals coming fourth and Amy Bellew seventh. Amy Callaghan also threw a personal best throw in the U16 javelin and was again very unlucky to miss out on the medals coming fourth overall, while Amy Bellew was very unfortunate not having any throws marked. In the searing heat on Sunday afternoon Mollie White ran brilliantly in the heats of the U16 250m hurdles to qualify for the final where she put in a great performance coming sixth overall. Katie Lenehan and Aine O’Sullivan both threw very well in the U17 discus with Katie just missing out on medal coming fourth and Aine sixth. Aine also threw very well in the U17 javelin to come fifth overall.  Best of luck to our athletes who are competing next Sunday in Tullamore at the B championships. 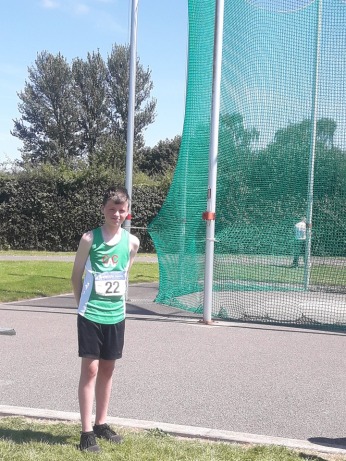