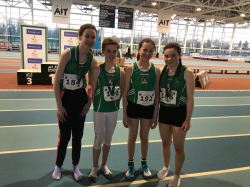 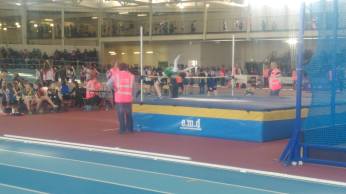 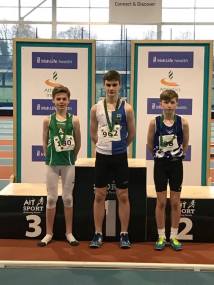 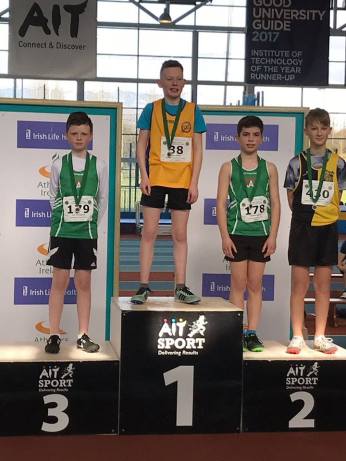 Day 4 of the Leinster juvenile championships took place today in the Athlone I.T. Arena. The club was down in force with eleven athletes competing and doing themselves and their club proud returning home with a nice haul of nine medals. Well done to everyone. There were some great results and personal bests making a lot of mothers very happy on Mother’s Day. Unfortunately some of our athletes couldn’t make it because of illness and injury so we hope Niamh Quinn, Emily Mc Greal and Aine O’Sullivan are soon fully recovered.

Amy Callaghan was in winning form claiming the gold medal in the U15 shot putt, with Amy Bellew also throwing well and was unfortunate to just miss out on the medals coming 5th overall. In a tough U13 shot putt competition, Aoife, Ellen and Lee, all put in great performances with Lee making the top 8 but had already moved to his high jump.

With both high jump areas been used at the same time and space quite limited, in the U15 high jump Amy Callaghan jumped well to claim the silver medal.  James Bellew and Lee Callaghan both jumped very well in the U13 high jump to claim the silver and bronze medals respectively.  Aoife Rohan put in a great performance in the U13 high jump coming fourth which will see her battle it out at the Nationals in a weeks time.  In the U14 long jump Laura Bolster claimed the gold with a jump of 4.61m and Ella Barry won bronze with a great jump of 4.50m, nice to see that all top three were Meath athletes. Loclainn was unlucky to miss out on securing a place at the Nationals for the U14 long jump just missing out with a 5th place finish.

Our youngest competitor today was Nia Hetherton who put in a great performance in the U12 long jump coming 9th in a very large group of 38 athletes. In her new event, Nia also jumped very well in the U12 high jump coming 6th.